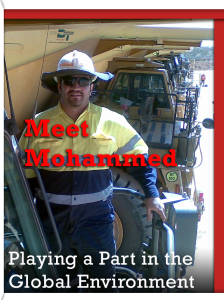 With a career spanning three continents and early aspirations to be an aeronautical engineer, Mohammed Hayat took on his biggest personal and professional challenge to leave the industry he had worked in for many years to explore his passion for the environment. After starting an Arts degree in 1995, Mohammed discovered his heart wasn’t in it and transferred to a Bachelor of Science in Environmental Studies, graduating in 2000.

Originally from South Africa, Mohammed migrated to Brisbane in the late ‘80s and worked part-time as a soil tester throughout his undergraduate studies. “For this particular role, there was a lot of on-the-job learning. I was exposed to some environmental components and I got to interact with what I studied such as water, air and noise monitoring.” His degree took him to CSIRO where he would test different rocks from the mines in southern and western Australia.

Then, an initial eighteen month internship exchange program with a small company in the US extended to eight years. “Initially I went over as a student and learnt a lot of on-the-job skills for geophysical surveying”.